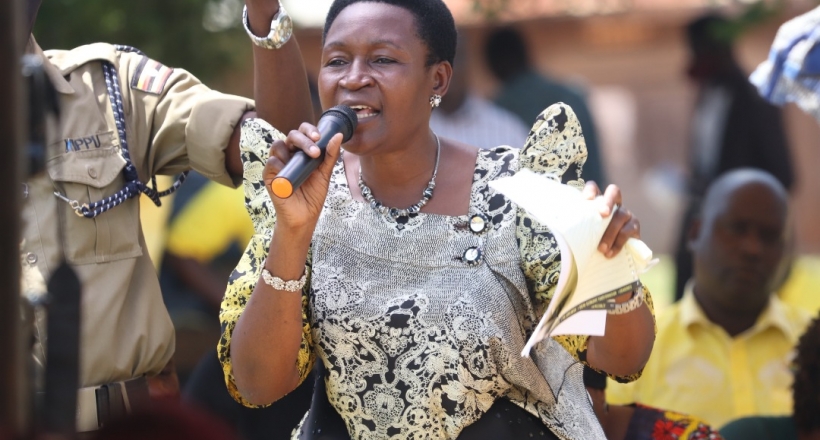 The NRM director for mobilization, Hon Rosemary Nansubuga Sseninde has applauded NRM party leaders in Kayunga District for ensuring that in the previous elections residents voted for President Yoweri Museveni to continue with the mandate of serving the people. This as she kicked off mobilization tours in the Central region on Tuesday morning.

Speaking to the party leaders at Bbaale Secondary School in Bbaale Sub-county, Kayunga District, Hon. Sseninde said:“Thank you for voting President Museveni. The NRM government has done a lot for this area including renovating the Kayunga Referral hospital and the Kayunga-Kamuli bridge.” She warned that no one apart from government should take credit for these two developments.

Sseninde further noted that government also upgraded Bbaale Health Centre III to a district hospital whereas every sub-county has a seed school. She also highlighted the industrial park in Nazigo which she said will help solve the issue of unemployment.

The NRM director said the party leadership had decided to camp in the district so as to look into the issues affecting the people and see how to solve them.

“We are here to speak about issues affecting us and how to strengthen the party. Some issues like the Galiraaya road were promised for a long time but I want to assure you that the road has been included in the next financial year. The issue of poor water transport is also becoming one of the past."

Hon Sseninde said in the past, the party has had problems of infghting that have cost it support. "Let us unite. Fights won’t help us. Time has come for us to rectify all these problems.vDont say you belong to this team or the other. Let us unite and have one mission,"Sseninde said.

She underscored that unity would make it easy for more Ugandans to join the party, yet continued infighting further strains party cohesion.

The party director for Information  and Public Relations, Hon. Emmanuel Dombo, who accompanied Hon Sseninde said it is time the party leaders began a new chapter. "Let us forget the past and focus on the developmental government programs like Emyooga and the parish development model that will help our people. Focus should be on how we can elevate our people from poverty other than fights," Dombo said.

The Bbaale Sub-county NRM chairperson, Shaban Nsamba welcomed the meeting that he said is timely.

He praised the Secretariat leadership for sparing time to come on ground, provide a listening ear to people's problems, a thing he said will solve a lot of issues  that have cost the party support in the district.

Nsamba also called upon leaders to work together to improve the party image and in the  long run improve service delivery.

As part of the tour, Sseninde and her team will address a series of meetings in all the three constituencies that make up Kayunga district.

The NRM party leadership led by the Secretary General, Rt.Hon. Richard Todwong last month launched the regional tours in Bukedi sub-region in a bid to look into challenges affecting the party leaders, appreciate input by the district leadership and renew commitment and assurance of working together to lift the party.

The regional tours throughout the country will help set a tone for monitoring government programs.