Todwong to lobby Gov't on NRM's representation to district councils 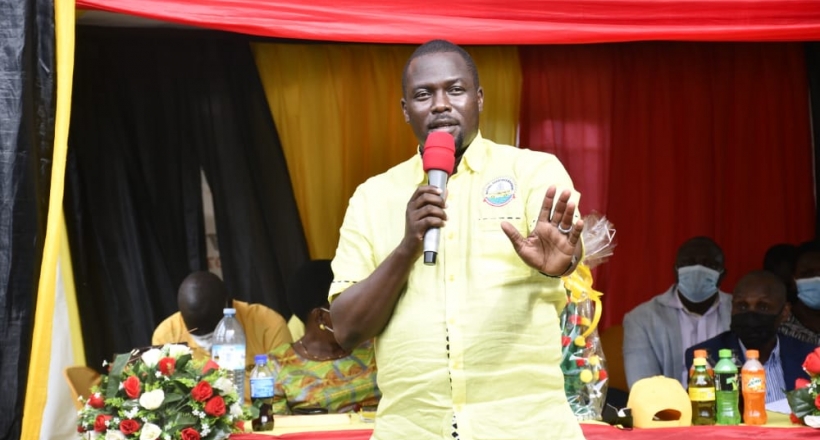 The NRM Secretary General Rt.Hon.Richard Todwong has revealed that his party leadership is in talks with government through the Ministry of Local government to introduce an amendment in the Local government Act which will enable NRM Chairpersons at various levels to sit in district councils as Ex-officials.

According to Rt.Hon.Todwong, NRM is the party in leadership whose manifesto should be implemented by the people that prepared it. He therefore wondered why such a role should be left to civil servants and elected leaders from other parties.

"As the NRM party, our responsibility should not stop at electing government into power but should also be empowered through direct representation to councils in order to create a platform for follow up and implementation of our manifesto. This is because in case of any project failure in your areas, the blame is shifted from technocrats and other civil servants to the government, hence suffering from the ripple effect in the long run, " Todwong said.

The Rt Hon Todwong said this while beginning his two-day tour of Bukedi sub-region which he started in  Budaka, Butaleja, Tororo and Busia, accompanied by other senior party leaders.

in his maiden visit to district leaders since his appointment, Todwong directed the leaders to start submitting quarterly reports which capture the progress of manifesto implementation and all government programs which are mearnt to benefit ordinary people within districts.

He added that as leaders, they should start to engage with their communities and keenly take time to understand people’s problems and strive to improve their livelihoods.

According to Todwong the leaders are social doctors who keenly pay attention to issues affecting people within society and forge a way to cure them.

He lashed out at leaders who join the population to lament against bad conditions affecting the people instead of confronting the issues at hand or seek for information and answers from relevant authorities.

Hon.Rose Namayanja, the deputy Secretary General  said the tour will help the party  to monitor and fast track the performance of their five-year  manifesto and National Development Plan III.

According to Hon Rosemary Sseninde, the director for mobilisation, the party leadership went to the region to fill existing communication gaps between the NRM Secretariat and the party district leaders which for long has delayed service delivery.

Some of the issues decried by some leaders range from limited facilitation,  and internal bickering that has split the party. Other issues raised included discrimination from government poverty allieviation programs like Emyooga and Operation Wealth program and neglect from party leadership until election period.

Todwong and other party leaders will tomorrow head to Kibuku, Pallisa and Butebo  districts as he concludes his visit within the area.

Dr Tanga Odoi, the NRM EC Chairman warned all party leaders against corruption and misappropriation of party funds once they are sent to facilitate party work.

Among the delegtation that accompanied the secretary General General was Amb. Barbrah Nekesa, the National Treasurer, Hon.Emmanuel Dombo, the director for Communication, Hajat Medina Naham, the Director Finance and administration, Hon Jane Alisemera, the Commissioner at EC among others.