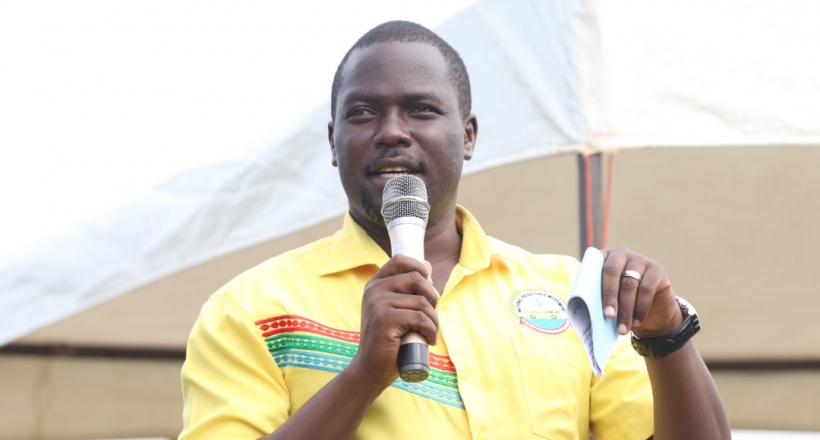 The National Resistance Movement(NRM) Secretary General, Rt.Hon Richard Todwong has urged the party leaders and members to reconcile in a bid to take the party forward.

“Problems are everywhere, even in our families but the issue is the ability to solve them. We are sorry for the wrongs done in the past but now is the time for us to unite,”Todwong said.

“We have talked and if you have ears, listen to us.  The party needs unity and not divisions.”

The NRM Secretary General was speaking to the party leaders at various levels from Busaana and Kayunga Sub Counties as well as Kayunga and Busaana town councils at Namagabi Secondary School in Ntenjeru North Constituency in Kayunga district.

Rt.Hon Todwong said that the new leadership at the NRM secretariat has now opened up a new chapters that  he said will always seek to hear from the party leaders and the supporters about problems affecting the party and the population at large.

He however urged leaders to desist from fights that he said have cost the party its support.

Reciting the adage of united we stand, divided we fall, Rt.Hon. Todwong said the divisions are doing a disservice to the party and its support but urged leaders to reach out to the people so that the rifts are closed.

“You should reconcile. There is good and bad politics but good politics is one which is close to the people and attend to their interests. The issue of divisions in the party came because we took long without interacting with leaders. However, we are here to open a new chapter of listening to the people and understand their problems.”

Giving an example of telecom companies, the NRM Secretary General said an MTN subscriber cant use Airtel airtime, adding that in the same manner, NRM supporters should only vote for the party flag bearers

“If you have an MTN simcard, you cant load Airtel airtime. This is what we are implementing under multiparty politics. We should vote for only NRM flag bearers.”

The NRM Secretary General also asked the party leaders to speak about issues hurting the population like land grabbing and corruption that he said have tainted the party’s image.

“If there are land grabbers, speak against them. If you fear them, tell us to speak to them.”

The NRM director for mobilization, Hon Rosemary Nansubuga Sseninde said by opening a new chapter, the party leadership is ready to move out to the population to correct the ills.

“This is a new chapter. We will no longer wait for elections to come to speak to you. We want to see how to make the party stronger and popular in Kayunga.

There have been infights between brothers and sisters which saw our support drop and we could not sit in air conditioners in Kampala as things go bad on the ground. We are here to ensure people unite for the betterment of the party,” Sseninde said.

“We want to ensure by 2026 we can return those big percentages we used to enjoy in the past. Give us ideas on now to rectify the problems. Let us learn to forgive each other.”

Sseninde told the party leaders that they should be uniting factors by bringing together all the warring parties for the benefit of the party.

Dr Tanga Odoi, the NRM Electoral Commission Chairman called upon NRM District leaders to desist from forming cliques, adding that they all belong to the NRM family under their founding father and the Party's National Chairman H.E Yoweri Kaguta Museveni.

Kayunga party leaders pledged to bury their hatchet and reconcile since the party takes precedent.