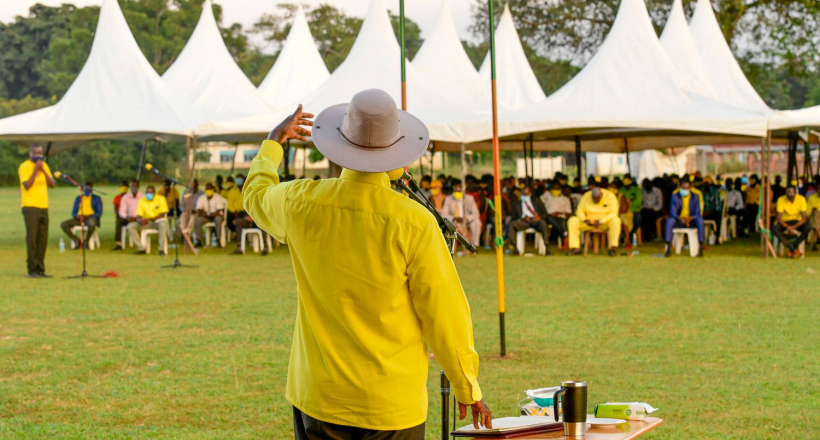 The President of Uganda also the NRM Presidential Flagbearer yesterday addressed the youths of West Nile and Lango subregions. The president specifically met the youths of various categories, including the District Youth Council Executive Committee, the NRM League DEC, and the NRM district Council NRM flag bearers and district Youth Councilors and the youth parliamentary flag-bearer from the region.

The youth raised a number of issues that included the need for the empowerment of the youths economically and their inclusion in the mobilisation exercise during the campaigns.

The President advised the young men and women not to squander their youth-hood by indulging in practices like drugs that can easily ruin their lives. He also advised them to always pursue the correct line that aims at solving people's problems instead of focusing on the politics of identity. He informed them that youthful life can be a good asset if well utilised to pursue the unity of the people. He informed them that many soldiers who committed various abhorrent acts in the past were young and like their seniors then, couldn't distil the correct line to follow.

The president reminded them that NRM has been able to transform Uganda because of doing a correct diagnosis of the problems that had bedevilled Uganda for a very long time. For instance, by emphasizing people's problems and taking good policies, the NRM had managed to transform Uganda into an island of stability and prosperity, amidst a see of challenges.  He advised the youth to concentrate on working hard and become productive. This was the conclusion of the official campaign in Lango and West Nile subregions.

Today, the President will commence his campaign trail in the Acholi subregion, where he will address a meeting of selected leaders in Greater Gulu in the morning and then address the residents on all radios in Gulu at 7 PM.

On Tuesday 17th 2020, the president will meet the leaders of Greater Kitgum in the morning and address the residents on the radio in the evening. Any rumour, therefore, to suggest that the president has called off the campaigns is false and should be disregarded with the contempt it deserves. After the Acholi subregion, the candidate will be heading to Karamoja region from Wednesday 18th to Thursday 19th November 2020.

We appeal to all people who have been invited in these meetings to ensure they have undertaken a Covid-19 test and have received the results and should also comply with the other SOPs of handwashing, temperature check, use a recommended sanitizer, always wear a mask and observe social distancing as directed by the Secretary-General, Rt Hon Kasule Justine Lumumba.