Africa should devise its own model of democracy, Prof Balunywa 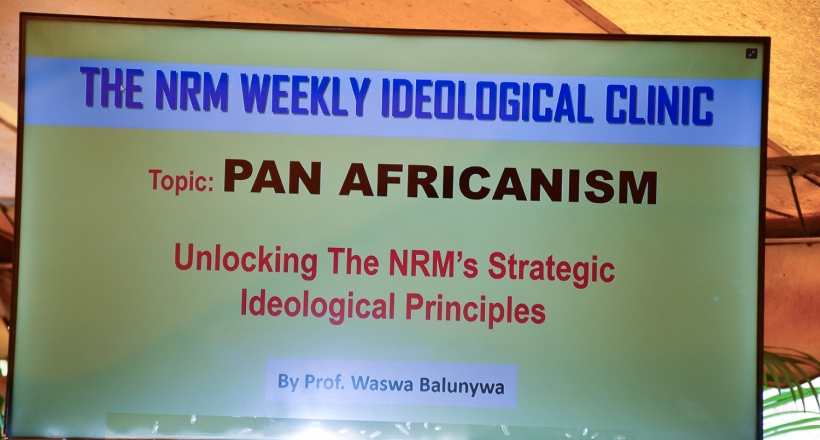 The Principal Makerere University Business school (MUBS), Prof Juma Wasswa Balunywa has hailed President Yoweri Museveni, also National Resistance Movement (NRM) chairman for his continued agitation of unity of African states, claiming it is the only solution to their underdevelopment.

Prof.Balunywa said Mr.Museveni has not only preached about Africa’s need to unify against foreign influence and exploitation from western powers, but has gone ahead to provide the necessary support in form of monetary and military support to various countries like Somalia, South Sudan and the Central African Republic in a bid to regain their full liberation.

The professor was delivering a lecture to NRM supporters, leaders and staff who were gathered at the party secretariat yesterday, during the weekly ideological clinic. The University don delivered his lecture via a zoom video link on the topic; ‘Unpacking the NRM’s strategic ideological principles: A focus on pan-Africanism.’

He stated that rather than relying on handouts from western powers, African states should instead work together with their neighboring states to end civil wars and foreign interventions if they are to achieve economic liberation and transformation.

“African states should jointly agree on their common agenda and vision for Africa through cross border trade, education and business and shun our differences in religion and race. Short of this, Africa is bound to remain at the peripheral and economic enslavement to wealthy countries,” Professor Balunywa warned.

He reiterated President Museveni’s call of investing in science and technology if Africa is to attain its transformation.

With a population of over 1.4 billion just like the People’s Republic of China, Balunywa says that Africa requires to pay their attention to proper utilisation of their minerals and agricultural products through science and technology instead of exporting raw materials.

“Africans must come out to develop their science if we are to resist and defeat the imperialistic conditions of western countries which for long have manipulated the continent through modern enslavement and kept people in perpetual poverty,” Balunywa said.

As an incentive to motivate them, President Museveni recently proposed a salary enhancement for the science teachers in government-aided secondary schools.

Dr Tanga Odoi, the chairperson of the party Electoral Commission called on the need for Uganda to devise its own model of democracy rather than relying on the western values and beliefs of what democracy is. According to Dr Odoi, the ideological clinics are the ideal tool that the government can use to reach out to the citizens and pick their views on how they want to be governed.

NRM’s director for Finance and Administration Hajat Medina Naham, who moderated the session, thanked the party Secretary General, the Rt Hon Richard Todwong for the initiative of the ideological clinics, which she said were timely to treat the lack of ideology among young Ugandans.

Also present for the 7th ideological clinic were the party’s director for information and PR, Hon.Emmanuel Dombo, Hon Rosemary Seninde, the director for Mobilisation and Hon Jane Alisemera, a party EC commissioner.