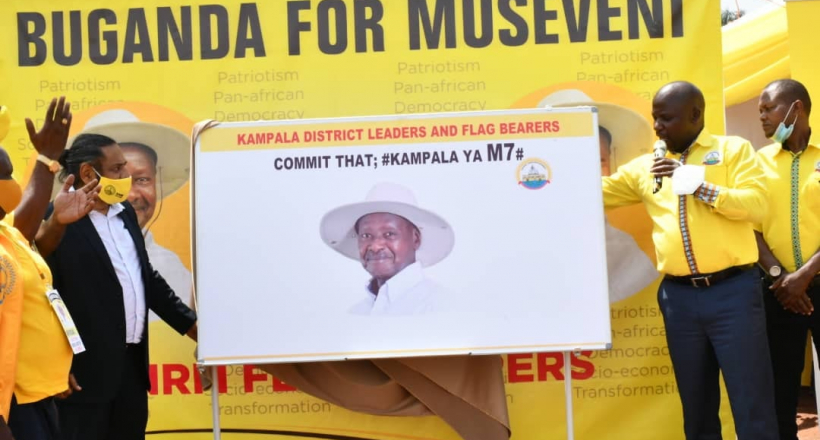 The NRM Vice Chairman for Buganda Region Hon. Godfrey Kiwanda Ssuubi this afternoon flagged off all the party flag-bearers for Kampala district at Kololo Independence grounds.

Kiwanda reminded the flag bearers of the four core NRM principles including Pan-Africanism, Social economic transformation, Democracy and Nationalism which has stirred Uganda to this far.

“As the Vice Chairman of Buganda region, we are here to fully endorse our support to the party Chairman and we want to win Kampala for NRM come 2021.NRM is a mass party because we managed to come up with candidates at all positions who were chosen by the people,” he said.

“If you contested and lost, you won’t have our flag and party logo. NRM is going to support all those candidates who won its flag.”

Hon. Kiwanda urged all those that lost in primaries to reconcile and unite with the winners and avoiding tiring up support for the party flag bearers.

“NRM has a credible presidential candidate, therefore, mobilize support for the President in Kampala using the party structures since we are going into a scientific campaign. As the NRM Vice Chairperson for Buganda, I have endorsed President Museveni for Buganda and all the flag bearers are supporting Museveni for Kampala,” he elaborated.

“This time round in Kampala, we have to win because the writing is already on the wall. NRM is the only political party that organizes primaries and the people choose their leaders unlike other parties where the winner is chosen by a group of few people,” Hon. Namayanja said.

She further thanked them for supporting NRM since the strength of the party starts at the grass root level.

Since NRM took over the leadership of Uganda, the country has for the last 34 years been Peaceful from border to border. We have been safe and this is what we mean by securing your future. NRM has won leadership at all levels in the youth elections. This is a clear indication of people power. Our main objective is retaining power and working for the people,” Hon. Namayanja said.

“I urge you to remain with the NRM spirit because when our flag-bearers win, we all win and vice versa therefore I urge you to support each other in order to win these positions.” She added

She urged the flag bearers to mobilise support for President Museveni as he gets nominated on 2nd November by the Independent Electoral Commission and also campaign for him.

Speaking on behalf of all the flags bearers, Faridah Nambi, the Woman MP flag- bearer for Kampala called upon her colleagues to mobilize support for the President and the party candidates at all positions.

Hon. Mathias Kasamba the Director in charge of Mobilisation, training, cadre identification and development called on the flagbearers to work closely with the party structures and ensure that NRM wins at all levels in Kampala.

The meeting was also attended by the NRM Vice Chairman for Kampala, Hon Singh Katongole and the Chairman of NRM Kampala central, Salim Uhuru among others.