Museveni calls off Wakiso campaigns, to address voters via TVs and radios 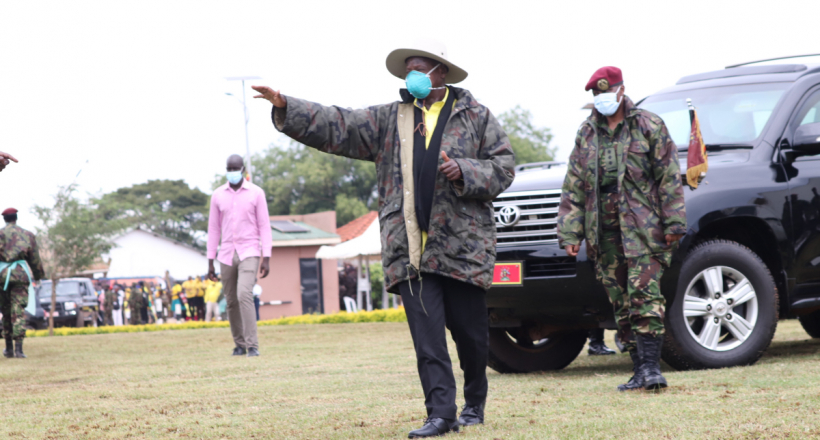 National Resistance Movement party presidential candidate, Yoweri Kaguta Museveni, has today called off his Wakiso district scheduled scientific campaign meeting in adherence to the Electoral Commission’s directive banning political gatherings in 13 districts. According to his twitter page Museveni will today make his address via televisions and radios to preach the NRM party success story and ask for support ahead of 2021 polls.

‘’Again, because of the ban on political gatherings by Uganda Electoral Commission, our campaign meeting in Wakiso will not happen. Instead, I will use the radios and televisions to speak to our people,’’ Museveni’s twitter post reads.

According to the programme, Museveni will officiate at the ground-breaking of Kiira-Kasangati-Matuga road at 11am before heading to Masaka where he will launch Tarehe Sita activities. He is then scheduled to address the Voters in Wakiso district at 7pm.

Yesterday, the president also cancelled his greater Mukono districts scientific campaigns but instead addressed the area voters through radios and Televisions.

Mr Museveni expressed displeasure at the EC directive saying his campaign meetings were not contravening the earlier instructions. "We were not breaking any rules in our campaigns, I ensured I never addressed rallies, not get out to wave or gather supporters. But the EC bundled us with those violating rules and we shall oblige no matter how unfair it is to us, Mr Museveni posted on his Facebook Page after commissioning the road in Mukono yesterday.

He added: "Hence for the commissioning of Mukono-Katosi road, I had to remove my yellow campaign shirt and come with a suit so that no one says I am breaking any rules. That said, I am happy to launch this road for the benefit of our people."

This comes after the Electoral Commission suspended campaign meetings in Wakiso and other 12 districts and cities in the country due to the surging Covid-19 infection and persistent violation of Standard Operating Procedures (SOPs) by some political candidates.

The EC spokesperson, Mr. Paul Bukenya Saturday said campaign meetings in the said districts which are considered to be registering high spread of the virus had been suspended starting December 26, 2020 until further notice.

In road infrastructure, the district has over 536km of roads, more than half of which are strategic roads, which however in need of an upgrade. The government is however committed to solve the challenge of budget shortfalls in the coming financial year. Working with KCCA some roads have also been improved given that these roads connect to the city under the greater Kampala Metropolitan Physical Plan. KCCA rolled out a new planning structure of the city in 2017, hopping to, among others things, extend services to the neighbouring areas.

Entebbe has a fair network of tarmac road within the town area. Entebbe international Airport is the major gateway by air into Uganda