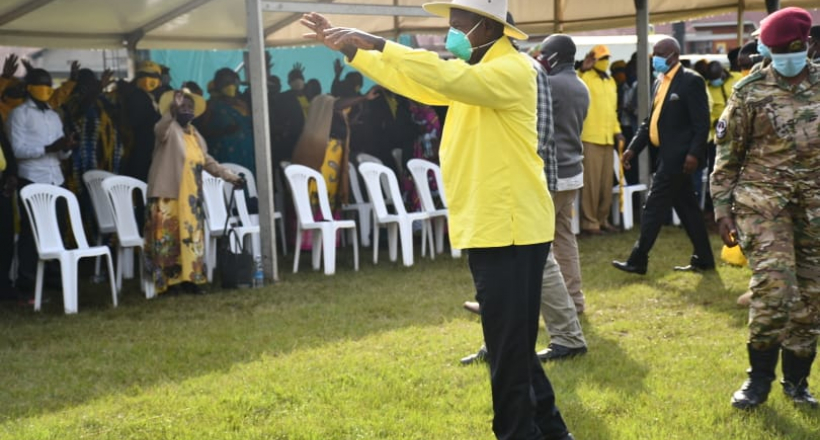 President Yoweri Museveni is today expected in Kisoro District where he will meet NRM party and youth leaders to brief them about his plans for the country post elections. The National Resistance Movement party Secretary General Hon. Justine Kasule Lumumba yesterday announced that the party chairman and presidential flag-bearer would revisit selected districts and those he skipped in order to consolidate his support.

The recent pronouncement by the party follows the decision by the Electoral Commission banning campaign meetings in 14 districts considered to be registering high spread of the virus. This, according to the party arrangements will go hand in hand with his television and radio addresses across the country.

“I want to inform the country that after the announcement by the Electoral Commission suspending political activities in the 14 districts in the country, the NRM party took a decision that our presidential candidate will increase on radio and TV programmes. We have also considered our presidential flag bearer to go back to some of the districts, some where he has been while others he did not make it,’’ Lumumba said.

Among the key issues awaiting the President to address in Kisoro is the tea and Irish potato processing factories that he pledged in 2010. Kisoro is the biggest producer of Irish potatoes in the country and is also said to grow some of the best tea in the region. The region is also prominent for working with the National Agricultural Advisory Services to export products to regional and local markets.

The factories hit a snag when in August 2013, Tom Mugenga, the proprietor  of  Kisoro Potato Processing Industries (KPPI)secured a loan amounting to US$2m (Ugx. 6.7 billion) from the government of Uganda through Uganda Development Bank. The money was to be used to construct a Potato processing plant to cater for the Kigezi sub-region.

The factory was meant to add value to Irish potatoes in the region to tap into the high-end restaurants in Kampala and the.

This was meant to boost local potato production which would compete against imports of Irish potatoes from South Africa and Egypt. The factory had earlier been commissioned by President Museveni in 2012. It, however, failed to take off, later forcing government to swing into action and take over its operations.

Finance minister Matia Kasaija has announced government’s takeover of a Kisoro potato processing plant after its owners failed to run it.

Speaking to Parliament in 2013, Finance Minister Matia Kasaija said government’s decision to take over operations was anchored on the fact that the project was “too important to the lives of Ugandans” especially in south western Uganda to be ignored.

Kabale and Kisoro produce the biggest chunk of potatoes – Irish and sweet and the factory was meant to add value – like making chips and potato powder for export and domestic market. It promised jobs and to enhance prices of farmers’ products.

There are currently more than 10,000 Potato farmers in Kigezi. The subregion produces more than 85 percent of the potatoes consumed in Uganda, and those exported to the Democratic Republic of Congo and Rwanda. However, most of it is transported in raw form, attracting less money.

The plant will process potatoes into different products like chips, potato powder, etc for export and domestic market. The investors have also promised more jobs and to enhance prices of farmers’ products.

Additionally the Uganda Development Cooperation (UDC) is exploring setting up an Irish potato processing facilities in Kabale and Kisoro. The government also through UDC partnered with Kigezi Highland Tea Factory Limited through a lease finance to set up tea factories in Kisoro and Kabale respectively. The factories are currently off taking tea grown in the two districts. This is expected to increase the value of exports by USD. 2.4 Million per annum, enable skills development among the Youths and create job opportunities.