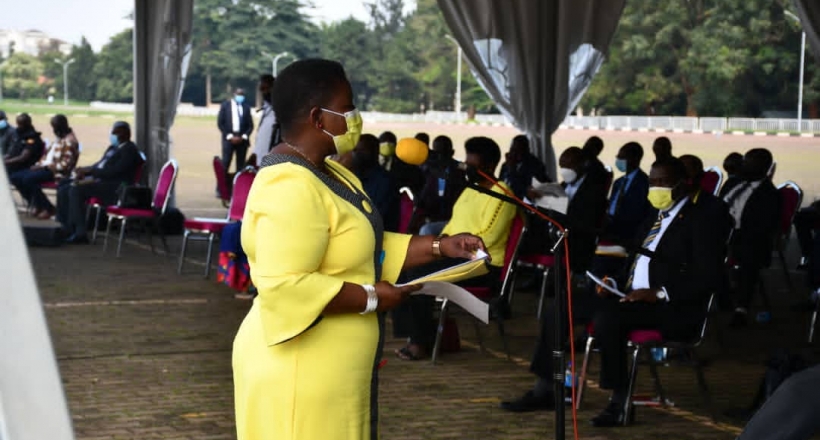 In December 2014, I was appointed by the National Chairman of NRM and President of the Republic of Uganda, H.E Gen.Yoweri Kaguta Museveni, as the Secretary General of the National Resistance Movement Political party, NRM.

This was at a time when not many women had featured in such positions of leadership before in Uganda and across the African Continent. One would therefore doubt if I could manage the task before me, especially where many men had failed before.

Seven Years down the road, I together with the team at the Secretariat and the entire NRM fraternity, have continued to grow stronger and to steer the NRM party in its pursuit of the socio-economic transformation of Uganda.

As a God fearing person, I owe my success to God and the constant desire to seek guidance from my superiors, especially the National Chairman of NRM and the members of the Central Executive Committee. I also endeavoured to consult the technical people who are more knowledgeable in their respective areas of specialisation. The success of a team also depends on the teamwork of members of the organisation, and this has been the cornerstone of our achievements as a party.

I was a bit lucky to have been appointed as the NRM secretary General after I had had an opportunity to serve as a Government Minister, a Parliamentary Commissioner and Member of Parliament, giving me a cumulative experience of 10 years as a politician at a senior level in government. Prior to joining politics, I had also served as a District Education Officer and teacher, a profession I had pursued with a lot of enthusiasm at graduate level. I am therefore very grateful to the appointing authority for entrusting me with this very important responsibility and for the continued guidance and counsel. I am also grateful to the senior members of NRM who never tire to provide us guidance as and when we need it.

The Prime Minister of Uganda, the Rt. Hon. Dr. Ruhakana Rugunda has particularly been of immense value as the overall coordinator of government, without whose input the party would struggle to fulfil its manifesto aspirations.

Over this period as the Secretary General I and my team at the secretariat, have presided over two general election where we have elected the president, the MPs, Local Government leaders and the Special interest Groups. Our performance during the elections has continued to improve, save for the recent past in the central region where we lost a number of seats. But Democracy being our fourth core principle, we honourably respected the outcome even when subsequent information clearly showed some irregularities in some areas. The NRM supporters throughout the country should not despair because of what happened in the central region. On the contrary, they should come up more energised because very soon the lies of the opposition will soon be exposed.

We now have a new Government under the National Resistance Movement (NRM) Party following the general elections on 14th January 2021, where H.E President Yoweri Kaguta Museveni and the NRM have been reelected. I therefore wish to take this opportunity to congratulate H.E Yoweri K. Museveni and the entire NRM family for this momentous victory. This renewed mandate will enable us to consolidate the gains as we secure the future of the people of Uganda.

The main focus of the new administration is clearly indicated in the NRM election Manifesto and it will focus on transformation of our people from being largely subsistence producers to becoming commercial farmers and business people. As a party, we shall consolidate this huge support, and win over new supporters and members in the next five years through:

As a mass liberation movement, we can only consolidate our position and win over new supporters if we set out to correct some structural mistakes and challenges currently facing the party.

Facts prove that the future and destiny of a political party and government depend on popular support. If we stray from the people and lose their support, we will end up in failure. We must bear in mind the new characteristics and the changing trend of the people we are leading today. We must organise our people, communicate with them, educate them, serve them, learn from them, and subject ourselves to their oversight. We should always be part of the people, work for their interests, and maintain close ties and share good and bad times with them. We should draw wisdom and strength from their great practice; deliver more concrete services to the people that meet their needs, relieve their burdens and benefit their lives; and put a stop to all actions that prejudice their interests. The new NRM Manifesto puts forward an extensive programme throughout the Party to heighten awareness of and implement the Party’s mass line, with the focus of serving the people and staying pragmatic and honest.

Adhering to the mass line is recognising that the people are sovereign in deciding their future and destiny. We should endeavor to mobilize and educate them about the NRM core principles. The strong foundation keeping the Party invincible lies in our adhering to the people’s principal position in the country, and bringing their initiative into play.

It has always been President Museveni’s consistent and clear political position to combat corruption, promote political integrity and keep the Party healthy. Building a fine Party culture and a corruption-free Party is a major political issue of great concern to the people. “Worms can only grow in something rotten.” In recent years, long-pent-up problems in some countries have led to resentment among the people, unrest in society and the downfall of governments, with corruption being a major culprit. Facts prove that if corruption is allowed to spread, it will eventually lead to the destruction of a party and the fall of a government. We must keep up our vigilance. Serious violations of Party discipline and State laws that have occurred inside our Party during the last so many years are of a vile nature and have produced shockingly harmful political consequences.

We also need to carefully think of mechanisms of infusing our supporters and mobilisers with the right attitude of sacrificing for the party as opposed to only working for the party for material benefit. This mercenarism must stop if we are to have a fully-functioning, vibrant and broad-based party that works for everyone. Owing to the leaders (mercenaries) who are scheming for pecuniary and other material benefit from the party, on a number of occasions we have heard statements by those who are “not eating” saying, “abaganyulwa mu NRM balala ate ffe ab’agikolera tetufunnamu” (“those who benefit from NRM are different but for us who work for it don’t benefit at all”). We must reawaken our revolutionary spirit and guide the leaders to adhere to the right ideological principles if we are to have a party that works for everyone. Greed, intrigue, selfishness and lack of discipline on the part of some of our leaders has polarised the party along the lines of “those who are eating” and “those who are not eating”.

In the last 35 years President Museveni has provided strategic leadership and guidance to the Revolution. The success of the Revolution and the ensuing benefits thereof can only be discussed in a sharper perspective of the strong and assiduous leadership that galvanized the invaluable sacrifice of the masses to the course of the revolutionary struggle. It’s this same foresighted leadership that will deliver Uganda to the much cherished vision of a transformed, modern, prosperous, middle class and industrialised Uganda in 30 years, according to Vision 2040.

Any institution derives its strength or weakness from the character and capacity of its founding leaders. Bad leaders create bad systems while good ones create good systems and strong institutions that live and stand the test of time. The successive victories, therefore, that NRM has registered as well as the confidence it has won from the citizenry over the years is largely a manifestation  of its good foundational tenets well thought out and pursued by the strategic  leadership of our Chairman.

The future of NRM, therefore, will be shaped largely by how we the successive and emerging leaders play our part while building on that strong foundation of the revolution without deviating from those core foundational tenets of; Nationalism, Pan-Africanism, Social-economic transformation and Democracy.

This article was first published in the 1st Edition of Legacy Publication, an NRM party publication of May-September 2021